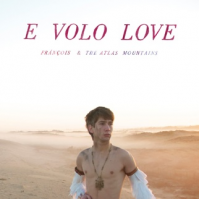 Francois And The Atlas Mountains

The first ever French Domino signings are ready to spread their wings over indie pop’s vast international landscape. With vivid looks and a slender body, Fránçois builds up castles in Saintonge, France, with Moroccan mountains, British phlegm and sturdy friendships. After seven years of passionate gigs and road trips across Europe which has seen them tour with Electrelane, Camera Obscura and most recently with Mercury-nominated King Creosote & Jon Hopkins, Fránçois & The Atlas Mountains convey a magnetic presence on stage. A deep sense of lightness and sincerity sets in as voices, keyboards and African percussion blend into instant pop.

An open collective, Fránçois & The Atlas Mountains has become a four-piece band over the years. Besides Fránçois who gives the band its name and soul, Amaury Ranger embodies its vibrating body thanks to the sheer intensity of his percussive skills. A new recruit, Scottish Gerard Black made a name for himself playing with Bill Wells and Findo Gask before joining forces with the band and leading an underground dolce vita in Bordeaux. Another Bordeaux stalwart, Pierre aka Petit Fantôme is a local musical treasure.