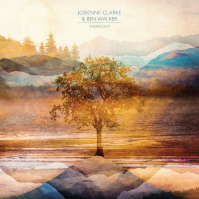 British duo Josienne Clarke and Ben Walker have risen to star status lately on the English acoustic scene, earning last year's Best Duo award from the BBC Folk Awards and across-the- board praise for two self-released albums, most recently 'Nothing Can Bring Back The Hour', with its lush single 'Silverline'. While The Guardian anointed them "chamber folk" (they certainly cut their teeth in that thriving part of the UK music scene), Clarke is an unusually compelling singer, sharing more in common with Sandy Denny, Gillian Welch, or even Nina Nastasia and Laura Marling, than your usual staid folk artist. Walker is a prodigiously talented guitarist and arranger and the two of them are engaging and often funny in a live setting where, in addition to their own songs, they choose covers brilliantly, from Denny, to Jackson C Frank, to Nina Simone, to death-obsessed traditional ballads. Clarke and Walker Rough Trade debut album brings bigger, more modern arrangements and production to their beautifully-wrought songs and Clarke's tremendous voice.