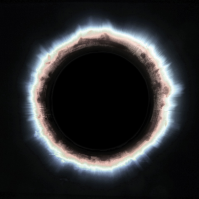 Every generation has their own version of the blues, music that captures a sense of melancholia and provides a sonic reflecting pool for young lovers, old souls, and the eternally heartbroken. For their darkly shaded and radiant debut album Full Circle, HAELOS have found their blues where others go to find pure, uncut joy: the dancefloor.

The London trio's version of a night out is a million miles away from mirror balls and sweaty bodies, their rippling electronic pop conjuring the exhilarating privacy of a cavernous club's dark pockets and the introspective comedowns that accompany rainy 5 a.m. cab rides. "It's the music you put on after the club," Lotti Benardout, who shares vocal duties with her other bandmates, states. "You can still feel that energy and euphoria, but it might bring you back to reflect on certain moments or memories."

The three bandmates decided to collaborate having been working on separate projects. Arthur Delaney and Dom Goldsmith had been working on material under the working title of HÆLOS; Lotti had been writing with Dom who was producing an EP for her at the time. The nocturnal, throbbing "Dust" was the first finished work to come from the trio's newly formed union; over the course of the following year, the rest of Full Circle's shadowy sounds came together. "When you don't know people that well, you can look back at things and retell your story," Benardout speaks on HAELOS' ability to mature from relative strangers into a cohesive musical unit. "It's new again. There's something quite cathartic about it."

Catharsis is, indeed, the name of Full Circle's game, an embodiment of a sound that has been referred to as "dark euphoria". Throughout the album, HÆLOS reconstruct the firmament of dance sounds past and present to construct an exquisitely elegiac mood that retains a sense of presence as it conveys the pain of emotional distance. Every moment of uneasy reflection is matched by quiet explosions—Delaney's forceful shouts over yo-yo synths on Full Circle's title track, Benardout's layered pleas over Goldsmith's cascading drum breaks on "Pray," and the soaring "Separate Lives," which hollows out drum'n'bass' propulsive patter to form an atmosphere that's as gently disruptive as it is emotionally nourishing. Throughout the album's loudest and most peaceful moments alike, Full Circle retains a pristine intimacy thanks to Goldsmith's keen ear for behind-the-boards magic; his touch gives the album a hermetic feel that stays with you long after it ends.

We're living in a time where the struggle to make human connections is hampered by our inability to unplug, and so Full Circle is a glorious, gorgeous contradiction of sorts: emotional pop that perfectly captures ageless emotional conundrums, featuring music that could only be made in the present day. "We all have a shared human experience," opines Delaney, HAELOS' main lyrical contributor. "As much as we try to run away from feelings with all the distractions around us, they always follow us around. They're a constant thing that unites us all." And so Full Circle is the sound of three individuals finding common ground, for themselves and for anyone who's ever believed that it's impossible to move your body without listening to your own heart.