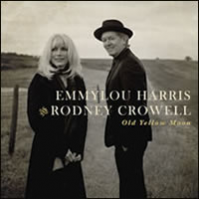 Old Yellow Moon, a new collaborative album from Emmylou Harris and Rodney Crowell, will be released on Nonesuch Records, on March 4. The 12-track duets album features four songs written by Crowell as well as interpretations of songs such as Hank DeVito’s “Hanging Up My Heart,” Roger Miller’s “Invitation to the Blues,” and Allen Reynolds’ “Dreaming My Dreams,” among others. In celebration of the album, the duo will embark on a series of tour dates this spring.

Produced by Brian Ahern (Johnny Cash, George Jones, Roy Orbison), Old Yellow Moon is the first official collaboration from the duo since Crowell joined Harris’ Hot Band as guitarist and harmony singer in 1975. In addition to Harris and Crowell, the album features world-renowned musicians including Stuart Duncan, Vince Gill, and Bill Payne, as well as members of the original Hot Band.

Harris says of the collaboration, “I first heard Rodney on a demo tape in 1974 and knew immediately from his voice and lyrics he had the right stuff. We met soon after, becoming band-mates in the Hot Band and starting a friendship that has continued and grown over the years. I always hoped we would someday do this record, and now I can finally cross it off my bucket list!”

Crowell adds, “The record’s overall tone calls to mind that Southern California blend of country music and rock and roll pioneered by Linda Ronstadt, The Flying Burrito Brothers, Gram Parsons and, of course, Emmylou and The Hot Band.” Old Yellow Moon is the follow up to Harris’ acclaimed 2011 release, Hard Bargain, which debuted in the top 20 on the Billboard 200 chart. Associated Press called it “gorgeous” and said Harris’ “silvery soprano is in fine form,” while USA Today called it “exquisite…her unmistakable soprano, at once grainy and ethereal, still wraps itself around a lyric with an angel’s delicate warmth.”

A 12-time Grammy winner and Billboard Century Award recipient, Harris’ contribution as a singer and songwriter spans 40 years. She has recorded more than 25 albums and has lent her talents to countless fellow artists’ recordings. In recognition of her remarkable career, Harris was inducted into the Country Music Hall of Fame in 2008.

Crowell is a multi-Grammy Award winner whose songs have been recorded by Johnny Cash, Norah Jones, Etta James and Grateful Dead among others. His 1988 breakthrough Diamonds and Dirt, generated five #1 singles and a Grammy Award for the song “After All This Time.” His critically acclaimed works The Houston Kid, Fate’s Right Hand, The Outsider and Sex and Gasoline were followed by the 2010 release of his memoir, Chinaberry Sidewalks. Earlier this year, Crowell released KIN: Songs by Mary Karr and Rodney Crowell. The album made its debut at #1 on the Americana and Country Rock album chart and spent 3 weeks at #1 on the Americana album chart. His honors also include an ASCAP Lifetime Achievement Award and membership of the Songwriters Hall of Fame.