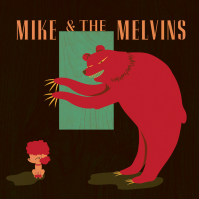 Three Men and a Baby

These are the facts we can be sure of in 1998, around the time his band godheadSilo went on hiatus, bassist/vocalist Mike Kunka busied himself by tagging along on a tour with his friends the Melvins. Somewhere along the way, Mike and the Melvins # King Buzzo (guitar/bass/vocals), Dale Crover (drums/vocals), and Kevin Rutmanis (bass/vocals), at the time # decided to make a record together, and gave the project the imaginative moniker Mike and the Melvins. Sub Pop, ever on the hunt for music#s Next Big Thing, enthusiastically agreed to fund and release the super-group#s debut, and recording commenced sometime in 1999. Whatever the reasons, the incomplete recording languished on a shelf from 1999 until 2015, when, much to everyone#s surprise, the involved parties reconvened, finished the damn thing, and delivered it post-haste to Sub Pop International Headquarters, where it was promptly scheduled for the coveted April 1st, 2016 release date. What a story, right? So, about the record It#s real good! Mike#s signature bass crunch and vocals are all over it, and the Melvins are in fine form. It has everything from hefty noise-rock churn to a Public Image Ltd. song to cough-syrup blues to deconstructed black metal. Neither Melvins nor godheadSilo fans will be disappointed, nor will detractors of either to paraphrase Mike, if you don#t like it, it probably wasn#t meant for you. Most of Three Men and a Baby was recorded in 1999 at Louder Studios by Tim Green (The Fucking Champs), and the rest was recorded and mixed in 2015 at Sound of Sirens by Toshi Kasai.