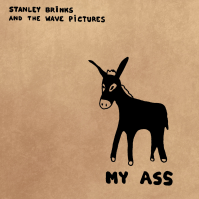 "...rich in a variety of sounds and original structures." Loud & Quiet

Stanley Brinks is joined by The Wave Pictures for their new record ‘My Ass’, the follow up to last year’s ‘Gin’, and their fourth album together.

After ‘Gin’ Brinks wasted no time in taking The Wave Pictures straight back to the studio, bright and early, the morning after the final show of their tour, to ensure they lost none of the fire still burning in their hearts from the final night’s drinks. Three playful days and twelve loose, jazzy, tracks later, with Brinks making salubrious use of his new penny-whistle and the assembled studio choir of friends hanging out, embraced into the recordings, he had his camel, ‘My Ass’.

‘My Ass’ is an album born out of Brinks’ life on the road, life as an outsider. It is a celebration of new drinking companions, in new bars, in new towns, every night. The memories of loved ones left at home, of places you can smoke inside and drink warm beer through the night. The shows that you wish could last forever. That island in the sun that keeps bringing you back.

Stanley Brinks was born in Paris, France, in 1973. He studied a bit of biology and worked as a nurse for a while. Half Swedish, half Moroccan, strongly inclined to travel the world, he soon began spending most of his life on the road and developed a strong relationship with New York. By the late 90s he’d become a full time singer-songwriter – André Herman Düne – as part of three piece indie-rock band, Herman Düne. Several albums and Peel sessions later and after a decade of touring Europe, mostly with American songwriters such as Jeffrey Lewis, Calvin Johnson and early Arcade Fire he settled in Berlin. The early carnival music of Trinidad became a passion, and in the early 21st century he became the unquestioned master of European calypso, changing his name to Stanley Brinks. Under this moniker he has recorded more than 100 albums, collaborated with the New York Antifolk scene on several occasions, recorded and toured with traditional Norwegian musicians, and played a lot with The Wave Pictures.

The Wave Pictures are David Tattersall, Franic Rozycki and Jonny ‘Huddersfield’ Helm. Formed in 1998 when Franic and David lived in a village called Wymeswold, the band played with several drummers until Jonny became a permanent member in 2003 replacing Hugh J Noble. In the beginning the band learned to play together by covering Jonathan Richman songs but soon David was writing lots of original material.

They have since released six studio albums to critical acclaim and played numerous sessions on BBC 6 Music, Radio 1 and Xfm. Interest generated from these recordings has enabled The Wave Pictures to play shows all over the world with artists including Jeffrey Lewis, Darren Hayman, Stanley Brinks, Freschard and Herman Düne.