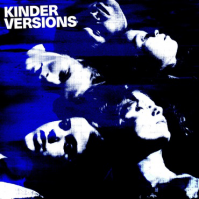 Icelandic bands often resemble a force of nature, and Mammut are no exception. What’s more, the quintet’s spectacular new album Kinder Versions, released on Bella Union, is exactly the kind of volcanic presence sorely lacking in 21st century rock. Likewise their unpredictable and uncategorisable shapeshifting sound, like a very modern twist on psychedelia. Mammut is Icelandic for ‘mammoth’ – the name that singer Katrína Mogensen, “plucked out of the air,” when she joined guitarists Alexandra Baldursdottir and Arnar Petursson, bassist Asa Dýradóttir and drummer Andri Bjartur Jakobsson for their stage debut, aged just 14. Katrína is the daughter of bassist Birgir Mogensen, a former bandmate of Bjork back when they were young post-punk adventurers; a questing spririt that Mammut have also unconsciously adopted, though without ever really discussing what kind of music they play. “We’re so close as a band, we have no limits for each other, no boundaries, we just follow our gut instincts,” says Katrína. It worked from the off; they quickly won the Musíktilraunir ‘battle of the bands’ and thereafter nominations and awards at the Icelandic Music Awards: their third album Komdu til Mín Svarta Systir won three of its eight nominations in 2014, including Album (Pop and Rock) and Song (Pop and Rock) for their epically slow-burning Salt. And with vocalist Katrína now singing in English, there’s a chance much more of the planet will discover what their homeland has known for a while. Kinder Versions’ intense character is obvious from the get-go, with opening tracks We Tried Love and the title track the album’s two longest, at over seven and six minuted respectively, embodying everything that is thrilling about Mammit’s ebbing and flowing dynamic. “With those lyrics and the soundscape, those songs had to be the introduction,” Katrína vouches. “And with the [the sparser, gentler] Bye Bye following, it’s the most honest way into the album.”