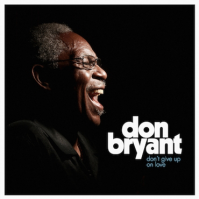 Dont Give Up On Love

The roots of this record are in the Memphis church, where Don Bryant began singing when he was 5. He joined his father’s family vocal group, then formed a gospel quartet for a high school radio gig. Broadcasting broadened the audience and they went secular, singing pop at WLOK on Dick Cane Cole’s popular show. After parting with the DJ, they took a very real step toward careers when, as the Four Kings, they began fronting Willie Mitchell’s band. Willie Mitchell led the swingingest, groovin’est band in the Memphis-Mississippi-Arkansas area - the American music floodplain. (He would later discover Al Green and make him a star.) Willie’s band was known for instrumental records, but when they’d play at Danny’s in West Memphis, Don’s group fronted them. But the group broke up and Willie, who was touring concert venues and dance halls, needed a vocalist who could play with his supple, slinky funky beats, and anointed Don Bryant as his leading man. Don could also write songs. He was still in his teens when, in 1960, Willie was producing the 5 Royales and Don handed him I Got To Know. The 5 Royales put it on wax. Don was hot in the spotlight and in the writer’s room. As Willie Mitchell carved out his place at Hi Records, Don was close by. Don cut songs at Hi under the Four Kings moniker (That Driving Beat) and as a solo artist (Don’t Turn Your Back On Me). He wrote material for other Hi artists, including Janet and the Jays and Norman West.
In 1969, still in the age of 7” singles, Don was popular enough to release an album - though the big breakout hit stayed elusive. Around 1970, Willie put Don with the Hi label’s newest act, Ann Peebles, who burst on the scene with Part Time Love. Don looked at this slight young lady and penned 99 Lbs for her: “You wouldn't know what I'm talking 'bout / If you never had a love like this /… 99 lbs of natural born goodness / 99 lbs of soul.” The relationship warmed, they co-wrote the hit I Can’t Stand the Rain in 1973 and were married the following year. Ann’s performing career continued, as did Don’s writing, and they began raising a family. Occasionally, Don returned to the microphone, dueting with his wife, sometimes releasing gospel material. Always, he continued to write songs. And all the while, that voice was maturing, mellowing, until these recordings that find him, at age 74, in peak form and taking O. V.’s song. The band is a mix of lifelong cohorts and upstart stalwarts. They understand where he’s been and where he wants to go, making his song How Do I Get There, a rhetorical question, because they have clearly found the way. I was lucky and popped by the end of the recording sessions. They’d just cut One Ain’t Enough and were listening to playback. Veteran drummer Howard Grimes, also of Willie Mitchell’s tutelage and the drummer on many of Don’s Hi sessions - he couldn’t keep from keeping the beat and he stepped to the middle of the control room floor. The Soul Train line formed. Howard’s arms came up and his feet went down. His eyes took a distant look and he was transported beyond the slow grind. His backbone slipped, he began to dip, everyone shouted and clapped. This kind of music moved audiences then and it moves them now. Even the music makers can’t stand still. Soul survivors, young and old - nothing holds them back.