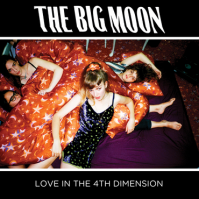 Love in the 4th Dimension

Girl gang the Big Moon unleash their debut album Love in the 4th Dimension on Fiction and it's love on first listen. You'll be instantly hooked on this joyous pop album full of riotous guitars, stadium-ready choruses and dynamic arrangements and rhythms. Love in the 4th Dimension oozes fun, style and confidence that the early singles hinted at. The album starts with the groove and sass of Sucker and doesn't let up until the last track The End. It includes 2016's best single and video Silent Movie Susie which was a golden nugget of a single that was as good as anything Elastica or Sleeper released. 2017 will be the year of the Big Moon.