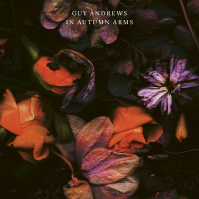 ‘In Autumn Arms’ marks Guy Andrews’ Houndstooth debut, and will precede his forthcoming album ‘Our Spaces’. The record includes one selected cut from the album, and one original piece of music exclusive to the single.

On the A-side is title track ‘In Autumn Arms’, which suitably captures the album’s overall pathos and emotive themes. A simple guitar melody falls melancholically over a bed of synth loops and string ensemble, while snares and thundering drums meld with distortion to heighten the pain and tension. The second track, ‘Let Your Shadow Decide’ is the darker, more downbeat counterpart to the A-side and explores Guy’s further use of orchestral timbres. It opens with tremolo strings and a weighty distortion bass-line, while similarly emphatic drums lead up to the track’s climax. Although seemingly disparate, Guy’s use of wall-of-sound noise and softer strings is skilfully mixed, carried forward by the stark guitar lead.

Having spent the last two years musically reinventing himself, ‘In Autumn Arms’ sees Guy Andrews take on a completely new creative direction. It took him over a year to find the right plug-ins, synths, and signal chains to be able to create the intense type of distortion he was searching for – hard and abrasive, but still musical and expressive. Guy’s re-focused approach breathes a new power and directness, with ‘In Autumn Arms’ opening up a new chapter in his musical career.