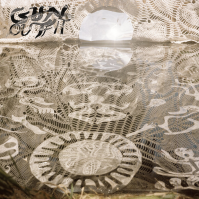 On their most refined and ruefully elegant album, Gun Outfit perfect their incandescent sonic signature: a dusky, canyon-cult blues fueled by melodic dual-guitar weaving and seductive male/female incantations at zero hour. It's the nocturnal sound of desert-damaged L.A. burnout, a soured American surrealism in rock and roll creole: white line fever, paint fume flashbacks, a stranger wading out alone into the black surf. The dangerous California obliquely mapped by Gun Outfit herein bears little resemblance to Tinseltown fantasies, except insofar as the incantatory dialogues of singers Carrie Keith (guitar, vocals, slide) and Dylan Sharp (guitar, vocals, banjo, balalaika) throw off a muted, wary carnal heat, the lingering afterimage of spent desire. ( Isn't enchantment what we like? asks the song In Orbit, dubiously.) Instead the inscape drawn through Dream All Over navigates the dark side of the moon the Hollywood Babylon L.A. of Kenneth Anger and David Lynch, Father Yod and Charlie Manson, muscle cars and drought as reflected upon a pair of road-weary human hearts. As Dylan sings in Only Ever Over, Out here on the West coast where the ocean eats the sun / We've known for a long time the end s already come. The band members, all of whom have made or worked on their own and others low-budget, homebrew art films in various capacities, draw from the syntax and systems of cinema, in two senses: the songs invoke imagistic memories and unfold like dreams unremembered upon waking, but they also rely on staunchly collaborative team processes. The unmistakable rhythm section of Daniel Swire (drums, percussion) and Adam Payne (bass, also of Residual Echoes) fuel Dylan and Carrie s spacious, enmeshed guitar work with a corporeal throb, and all decisions are democratically decided. Friend and mentor Henry Barnes (Amps for Christ/Man Is the Bastard) plays three different homemade electric sitars on the record. Facundo Bermudez (Ty Segall, No Age) engineered and co-produced.