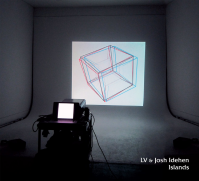 'Islands' is the second album and live project from Worldwide Award-winning producers LV, and Benin City vocalist Josh Idehen, three years on from their critically acclaimed debut collaboration 'Routes'. Where the 'Routes' album saw Josh's voice used in fragments to examine themes of life in modern London, 'Islands' sees LV move Idehen's lyrics and vocals front and centre. More so than on 'Routes', Josh is creating little worlds and telling stories with this project, explains Wil LV. We tried to write music around him, with highs and lows; trying to make it coherent... but not too coherent. British, Nigerian; rapper, poet; comedian, depressive; lover, fighter; energizer, observer; narrator, subject: being Josh Idehen is a world of contradictions. Everything that was coming up through 'Islands' does relate to a part of me, he explains. That feeling of being an outsider, being isolated and this kind of lonely story teller. And not in a kind of I'm cool, I'm different , but just an outcast, always on the outside looking in. Born in London to Nigerian parents, he returned to Nigeria at four when his father started the country's first video rental store. All I did was watch TV. So I had this weird kind of displacement, because all my frames of reference were English or American. I would go to a school and no-one would know what I was talking about when I would mention Knight Rider. With unlimited VHS tapes to hand, perhaps it was inevitable that Josh would become a story-teller. Indeed, the Islands of this project's title could represent the disparate themes between which Idehen's lyrics hop. On Imminent , overheard whispers on an East London balcony tell the tale of an unforeseen demise, while on Waiting For the Night , Josh drew on honest reflections of his experiences after he returned from Nigeria. Obsessed is about an unhealthy, social-media enabled reaction to being put in the post-coital friend-zone. I tend to be a bit full on... says Josh. I think it was because when I was in Nigeria, I lived in a very Catholic house until I was twenty, so you can imagine me coming to London... Murder, desperate loneliness, obsessions and sexually-unfulfilling nights out: on paper you d be forgiven for thinking that Islands is a thoroughly morbid affair. Some of Josh's more poignant moments happen when the music pares back and his performance becomes the focus, explain LV. Between Josh's observational eye and LV's considered yet dance-floor moving production style, with its funky hardware synth jams and live drums, delightful aesthetic contradictions abound on Islands. Of course we always make one track at a time, but once you start to get a collection of tracks you start to see a bigger picture... adds Wil LV. There's a fair bit of improv when we're recording, but when it comes to putting tracks together, we're choosing to use certain things we've come up with over others because they hang together well thematically. Lead single Imminent has received huge support across BBC Radio 1 and 1Xtra, and upon supplying the parts of the tune for a remix competition, LV were overwhelmed with over 120+ remixes. Of the album as a whole, the title track Island is perhaps the most unexpected, and took some strength to find. Josh had been working on different versions of a story, until he had a moment of clarity. I literally just thought, you know what? I am just going to write what I feel is the funniest, darkest story that I would be happy to read, so that I felt comfortable with myself and not give a fucck about what anybody else thought.