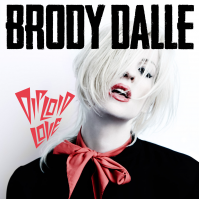 Brody Dalle spent a year writing, playing, recording and co-producing her first solo album, a riotous blast of punk rock with a pop sheen that storms through ideas about the modern age, triumphing against the odds and even spirituality. She co-produced everything with Alain Johannes (Arctic Monkeys, Them Crooked Vultures, Mark Lanegan) at his studio, and at her and husband Josh Homme's studio Pink Duck, both in California. â€œI've always had a hand in crafting how it's going to sound and hearing it and trying to make that happen. But it's the first time I've put my name on something for productionâ€, she says of the release. Amazingly, she wrote all the songs and played almost all the instruments you can hear on the album â€“ save for a few incredible guests. Brody has had a long, wild career in music. â€œIt's the only job I've ever had and I love it.â€ In her native Australia, her first band, Sourpuss, got her signed at 15; she later moved to LA and formed The Distillers, becoming pack leader of a band of hardcore reprobates, and spending her 20s touring the world. After that, she released a killer album rife with hooks under Spinnerette and now she returns in fighting form under her own name with her own solo project.