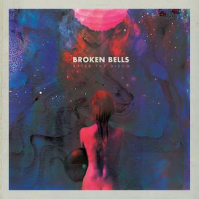 James Mercer (from The Shins) and Brian Burton (Danger Mouse) went back in the studio and have delivered a magnificent second album as Broken Bells - The album is entitled 'After The Disco'. The album's central appeal is its pop sensibility and the catchiness of its choruses. 'After The Disco' rarely sounds like an indie rock record, but you can still hear elements of The Shins here, Mercer's croon instantly recognisable. Danger Mouse's atmospheric digital soundscapes and resonant bass lines are equally distinct. 'Holding On For Life''s funky, mid-tempo groove recalls the album's predominantly post-disco themes, with Mercer's falsetto veering into Bee Gees territory, while opener 'Perfect World' coalesces all the trademark qualities of both artists.

LP - limited to 500 copies on 180 Gram vinyl housed in a Gatefold sleeve with Download.