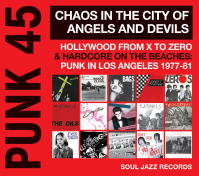 Punk 45: Chaos in the City of Angels and Devils - Hollywood From X To Zero and Hardcore on the Beaches: Punk in Los Angeles 1977-81

Chaos in the city of Angels and Devils# is the new instalment of Soul Jazz Records# Punk 45 series featuring an array of first generation Los Angeles punk bands including X, The Germs, The Zeros, The Urinals, The Weirdos through to second generation hardcore groups like The Circle Jerks, Adolescents and T.S.O.L. Unlike the other major cities of New York and London, Punk in Los Angeles was pretty much ignored by the major record industry. As bands sprang up, Los Angeles punk gave rise to a wide range of its own DIY independent records with labels like Dangerhouse, Bomp!, What? And Upsetter documenting the nascent emerging scene. Original Los Angeles punk came in two distinct phases. The first punk groups (c.77-79) all centred around The Masque club in Hollywood, and the birth of the first ever hardcore groups who emerged in the surrounding Los Angeles suburb and beach areas (c.1979-81), mixing punk, skate and surfer ideologies. This album includes music from both periods. 'Chaos in the city of Angels and Devils# documents this in detail. The 64-page outsize CD booklet features extensive notes, exclusive photography from celebrated original photographers Jenny Lens, Melanie Nissen (Slash magazine) and Edward Colver, original cover art as well as interviews and features on bands and labels (including The Urinals, Flesh Eaters, Dangerhouse, Posh Boy, Frontier, Upsetter and more!). This is the sixth Punk 45 release on Soul Jazz Records and follows on from the earlier releases covering punk from Cleveland, Akron, UK, USA and proto-punk, as well as the book Punk 45 # Cover Art of Punk written in collaboration with Jon Savage.