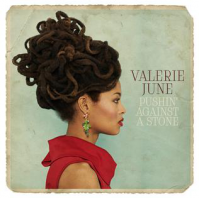 Pushin' Against A Stone

The debut album from Valerie June, titled â€˜Pushinâ€™ Against a Stoneâ€™ due for release in May 2013, is now available to pre-order on heavyweight 12â€ Vinyl (including download code) and CD.

Her debut single â€˜Workinâ€™ Woman Bluesâ€™ was revealed in November 2012 to much critical acclaim, with a performance on Laterâ€¦ with Jools Holland, BBC6 Music session, amongst other global radio stations, and a short European tour. â€˜Workinâ€™ Woman Bluesâ€™ is a abona-fide blues-pop anthem, as if Bobbie Gentry fronted a Stax soul-revue, those mesmerising vocals telling it how it is: â€œI ainâ€™t fit to be no mother, I ainâ€™t fit to be no wife, yeah, I been workinâ€™ like a man, yâ€™all, Iâ€™ve been working all my life.â€

The album â€˜Pushinâ€™ Against a Stoneâ€™ was mostly recorded at Dan Auerbachâ€™s (The Black Keys) Easy Eye studio in Nashville, as well as L.A. and Budapest, and was produced by both Dan Auerbach and Kevin Augunas (Edward Sharpe & The Magnetic Zeros, Florence & The Machine).

Valerie supports Jake Bugg on his sold out UK tour in February 2013 with many more live dates to be announced, and look out for the next single due for release in March 2013.