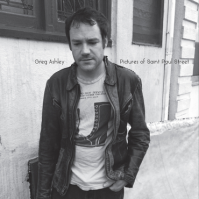 Greg Ashley has been a ­fixture on the underground music scene since the late 90’s while stra­ng eardrums as a teenager in Houston in garagepunk band The Strate-Coats. Since then he’s proven himself not only as a songwriter, singer and guitar player in bands like The Mirrors & The Gris-Gris, but also as a producer / sound engineer. His career as a solo artist is vast & varied, spanning the gamut between fried & beautiful psychedelia, gorgeous & cathartic symphonic suites & gentle, damaged folk music, beginning with 2003’s “Medicine Fuck Dream” & last leaving us with 2014’s “Another Generation of Slaves”. His latest, “Pictures of Saint Paul Street” carries forward that album’s musical palette (a rootsy amalgam of tortured, Cohen-esque folk tinged with the beer soaked recklessness of a West Texas honky-tonk). The songs on “Pictures of Saint Paul Street” are lush & beautiful autopsies of society’s underbelly, with stark and brutally honest ruminations on humanity. Songs like “A Sea of Suckers” & “Pursue The Nightlife” pull no punches, while “Jailbirds & Vagabonds” and “Blues For A Pecan Tree” carouse on a more abstract, human (almost romantic) level. By the time you’ve hit the album’s centerpiece; “Bullshit Society”, Ashley’s songs move from ballads of hopeless misery to rallying anthems for the dispossessed. The people & artists who move further to the fringe as power and greed overtake our planet, a situation all too familiar to Ashley as he was forced to relocate his long-running Creamery Studio from it’s long time home due to the rampant gentri­cation of the Bay Area. “Pictures of Saint Paul Street” isn’t always an easy listen, but that’s the point; the journey to salvation isn’t easy or pretty. The protagonist in many of Ashley’s songs may be Ashley himself - a true artist willing to admit he’s nowhere near perfect, and honest enough to document his sunrises & sunsets.