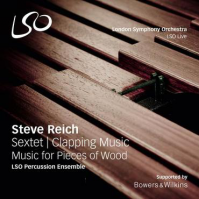 180 Gram Vinyl with Download. For Record Store Day 2017, the percussionists of the London Symphony Orchestra explore the music of America’s most influential living composer. A giant of modern music, Reich’s pioneering work has influenced countless performers, breaking boundaries across genres. Notable names inspired by Reich include James Murphy of LCD Soundsystem, Jonny Greenwood of Radiohead and even David Bowie. A seminal piece in Reich’s output, ‘Sextet’ employs his universally recognisable soundworld and its sequence of harmonies gradually overlap and interweave. Introducing more aggressive rhythms and dissonance and than previous compositions, the relationship of the five movements is that of an arch form, A-B-C-B-A. Reich says of the piece: "The ambiguity here is between which is melody and which is accompaniment. In music that uses a great deal of repetition, I believe it is precisely these kinds of ambiguity that give vitality and life". Perhaps Reich’s most famous piece, Clapping Music strips things back to the bare essentials and takes traditional African rhythms as its starting point. Conceived from a desire to compose music that would need no instrument beyond the human body, it’s a key example of the composer’s technique of phasing. The whole work consists of a single rhythmic cell which becomes staggered as the work progresses, creating an entrancing and hypnotic effect.