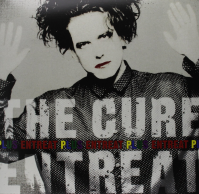 Double 180 Gram Vinyl with Download. The Cure's seminal mini-live album, 'Entreat', from 1990 has been remixed and digitally remastered by Robert Smith and has been expanded from its original 8 songs to 12 with 4 songs previously unreleased on vinyl. Recorded on the 1989 Prayer Tour at Wembley Arena, London - this 180 Gram 2LP set now features the original 8 tracks plus newly remixed and remastered live versions of 'Plainsong', 'Lovesong', 'Lullaby' and 'The Same Deep Water As You\', available on vinyl for the first time.