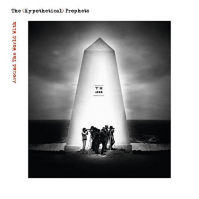 All Around The World With

A lost new wave classic given the definitive reissue treatment. The (Hypothetical) Prophets were a collaboration between French electronic pioneer Bernard Szajner and British musician Karel Beer, recording something of a Soviet-themed concept album under the pseudonyms Joseph Weil and Norman D.Landing. It has now been rescued from oblivion by InFine who lovingly reissued 'Visions Of Dune' by Prophets member Bernard Szajner in 2014, to much critical acclaim. Re-mastered from the original tapes with the full co- operation of the band members, the track sequence restored to how the composers originally intended it and previously unheard bonus tracks on the CD. Utilising William Burroughs style newsreel cut-ups, harsh electronics comparable to contemporary records by the likes of Cabaret Voltaire, caustically satirical lyrics and deadpan vocals reminiscent of the Flying Lizards. Parallels can be also be drawn with the early releases by Mute Records which contrasted the harsh experimentation of The Normal with the chart- bothering likes of Depeche Mode. An argument could even be made that the Prophets predict the self- referential meta-pop of a group such as LCD Soundsystem.