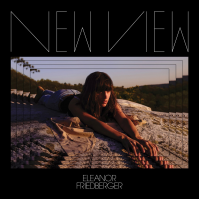 New View, the third solo album by Eleanor Friedberger, was rehearsed in the Los Angeles neighborhood of Echo Park and recorded in upstate New York. The former is a place where characters in Warren Zevon songs get clingy with their old lady while toughing out heroin withdrawal; the latter is where Bob Dylan got clingy with Robbie Robertson after flying off his motorcycle and revisiting the highway with his face. The songs were recorded live to tape with simple instrumentation: drums, bass, Wurlitzer and 12-string acoustic guitar on almost every track, courtesy of the band Icewater (Malcolm Perkins, Jonathan Rosen, Michael Rosen, Noah Hecht), with Dorian DeAngelo contributing a handful of well-placed guitar solos. Producer Knieper (son of Jurgen Knieper, the German composer whose credits include the score to Wim Wenders' Wings of Desire) gives the album a classic sound, like something that's existed forever on a record collector's shelf, wedged in with Dylan's New Morning and John Cale's Vintage Violence. For everything new about New View, it still fits comfortably in the continuity of Friedberger's work. Songs like "Open Season" recall the Furnaces at their most magisterial. The wry, plainspoken "Because I Asked You" builds on the style Friedberger first polished on her solo debut Last Summer. And then there's "A Long Walk," the sun-striped finale that lends a memorable afterglow to New View. She's never lacked confidence -- this is someone who once took a fractured nine-minute ballad about the international blueberry trade and put it across like it was "Thunder Road" -- but there's a new kind of confidence on this record. It's a sweet, aching goodbye from an album that seems full of them.