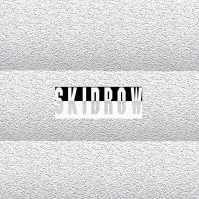 "Skid Row started as a collection of poems, it came first as words, then grew into becoming the lyrics of Skid Row. I was writing about the state of the world around me, living on what feels like the brink of societal collapse while also seeing high excess everywhere. all the sounds of the streets crept in, the blood and tears on the street, the echoing sirens in the early morning fog, soaked into the poetry and it became evident that LA is a hyper America. a place where violence (media and real life), excess and poverty, police exceptionalism & brutality, racism interact daily. racism is a war on reason, so in my state of animosity I wrote Skid Row, I'm a disciple of the streets my spoken word and music on Skid Row mirror these conflicts that spill out over the western landscape like a painting of America frozen in a state of hyper real war". - JAMES FERRARO Skid Row is the studio debut from James Ferraro due Nov 13 2015 it was recorded entirely in Los Angeles CA and is the follow up of 2013's moody brutalist masterpiece NYC HELL 3AM. Musically Skid Row deconstructs and rebuilds a scrap yard of genres and aesthetics Thrash / Country / Modern Classical / Neo-Brutalism all shuttering under a metallic detritus overloaded like a skipping CD.