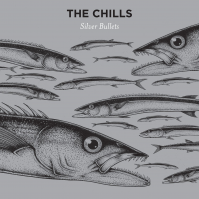 The Chills release their first full length album in nearly two decades. Silver Bullets' hails the return of one of New Zealand's most respected exports; Bursting with chiming Dunedin-pop anthems, melodic rock and Phillipps' playful punk-rock tendencies, the thrilling new album brings them to the next chapter. Recorded at Albany Street Studios in Dunedin (NZ) the album instantly reaffirms Phillipps' aptitude for writing intelligent and timeless pop songs delivered with conviction. Whether tackling issues on the economy, fighting with Silver Bullets or the observant nature of Southern Lights on Aurora Corona , The Chills complex pop resonates in a cacophony of dark-edged songs. Their underlying melancholy remains and is offset by their signature catchy melodies bringing a haunting depth to their idiosyncratic sound. New Zealand legends, The Chills are led by Martin Phillipps. Formed in 1980, the indie luminaries revolving line-up has had Phillipps at its core for over 30 years. Joining influential labels Creation and Homestead, they then moved to Warner Bros imprint Slash and onto the world of majors. At the height of their success John Peel invited them in for a number of BBC sessions which were released for the first time late last year. Significant chart success at home and a following worldwide would see 1990's Submarine Bells gain critical acclaim. When Soft Bomb dropped in 1992, as they toured the US, things imploded resulting in the group disbanding and it wasn t until 1996 that their next album Sunburnt appeared with a new line up on the Flying Nun label. Still burning brightly, and with an extraordinary career, the group has gone through reformations with breaks on and off. In the late 90s and early 00s they returned to the live scene reaching wider audiences. With 8 brand new tunes, they released mini-album Stand By in 2004. In 2013 The Chills joined Fire and Far South with their first release Somewhere Beautiful , a live LP unearthing rare recordings from a private NYE party. A full band tour is planned for early 2016. Martin Phillipps will also be taking to the road for solo shows across Europe this autumn.