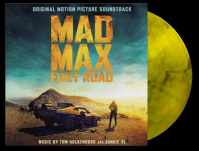 From director George Miller, originator of the post-apocalyptic genre and mastermind behind the legendary Mad Max franchise, comes Mad Max: Fury Road, a return to the world of the Road Warrior, Max Rockatansky. An apocalyptic story set in the furthest reaches of our planet, in a stark desert landscape where humanity is broken, and almost everyone is crazed fighting for the necessities of life.

Within this world exist two rebels on the run who just might be able to restore order. There’s Max, a man of action and a man of few words, who seeks peace of mind following the loss of his wife and child in the aftermath of the chaos. And Furiosa, a woman of action and a woman who believes her path to survival may be achieved if she can make it across the desert back to her childhood homeland.

The film’s epic score is written by Tom Holkenborg, aka Junkie XL, a Grammy nominated and multi-Platinum producer, musician, and composer. Junkie XL’s versatility puts him on the cutting edge of contemporary music, as well as in the vanguard of exciting new film composers. He is able to draw on his extensive knowledge of Classical forms and structures while keeping one finger planted firmly on the pulse of popular music. When this eclectic background is paired with his skill as a multi-instrumentalist (he plays keyboards, guitar, drums, violin, and bass) and mastery of studio technology, a portrait emerges of an artist for whom anything is possible.