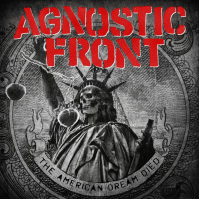 Seminal NYC hardcore veterans AGNOSTIC FRONT, have changed the face of music throughout their 30-year long career. The two records that started it all, United Blood and Victim in Pain, are legendary New York hardcore release and were partially responsible for the creation of the hardcore genre itself. Now with their 11th studio album, The American Dream Died, the band has perhaps made their most aggressive album in recent years, while still embodying every era of their music. From crossover, to proto grindcore, to subtle oi influences; there's something for every AGNOSTIC FRONT fan. "Myself and the band has never felt so confident and passionate about a release," affirms vocalist Roger Miret. "It's full of anger, rage and honesty; all the makings of a classic! The session was really intense and the results show it all!"
These rarely confronted and always respected leaders of hardcore were established as one of the meanest-sounding bands in the emerging punk genre, helping to initiate the term "hardcore," and placing an entire uproar on the New York map by association. From the start, AGNOSTIC FRONT released a catalogue of fast and violent punk tunes consisting of distinctive and aggressive drumming, fuming guitars, overdriven bass work, and a non-stop barrage of chaotic shouting.

Long outliving their now-legendary contemporaries like Minor Threat, SSD, Dead Kennedys and Black Flag, AGNOSTIC FRONT could easily live off their laurels, but their fight is not yet over! Throughout their storied history, AGNOSTIC FRONT has been anything but a ravishing group of individuals living prosperously and content. In fact, the band is more akin to have experienced growing up in adverse streets, undergoing arduous times, serving time in prison, become inflicted with murdered friends, the list would go on perpetually. But while there are definite vestiges of the past affecting them, they manage to continue and expose the conflicts they had to undergo in a compellingly evocative approach by relating it to their views of the world today.