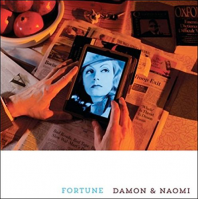 The pair's latest project, Fortune, is an LP released in tandem with Naomi Yang s video piece of the same name. She refers to the work as 'a silent movie', though the visuals are so bound up in the music (and vice versa) that it s more of a long-form music video, a visual poem set to the metronome of a textural score. An ongoing tarot card motif ties in a facet of the suddenly slippery term 'fortune', using Damon & Naomi s now familiar brand of close, acoustic warmth to explore the past s bearing on the future: 'I want to be over / To touch and be gone / Forget this amnesia'. Fortune, as a film or an album, is itself an expressive portrait, but doesn t adhere to any obvious narrative; rather, it s a comfortable space that the viewer can move in and out of, dreamlike and immersive. The eleven new songs don t require visual accompaniment, Damon & Naomi have constructed the sequence to communicate through sound alone.