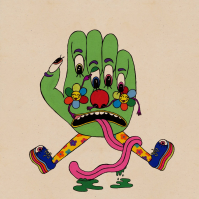 Gliss Riffer marks new territory for Deacon who, following up on the release of his large ensemble-based recordings - 2009's Bromst and 2012's America - decided to return to a simpler way of writing and recording, similar to that of 2007's Spiderman of the Rings, which resulted in this self-produced album.

What Gliss Riffer shares with Spiderman of the Rings as a musical experience is a direct and ecstatic energy. It trades in exuberant, uncontained fun that is tempered by lyrics that yearn and are set in defiance of life's nagging anxiety. The bliss on this record is well-earned.