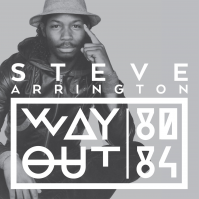 Steve Arrington, 80s hit maker and former front man of funk legends Slave, is back after a 20+ year hiatus from the music business. His collaborations with Snoop Dogg and Dam Funk from 2013, and brand new self-produced material throughout 2014, show that Steve''s still got the funk in super human quantities (as they say in Dayton OH, home town of Arrington, Slave, Zapp, The Ohio Players etc - "there must be something in the water"). This fall sees the release of "Way Out (80-84)" a retrospective encompassing all of Arringtons classics "his first solo single, the Slave backed Summetime Lovin / Special Effects from Mars, much sampled hits like Way Out" and Weak at the Knees from his early solo albums (just check the credits on tracks by A Tribe Called Quest, Jay-Z, Mariah Carey, Pitbull, etc), unreleased songs deemed too progressive by Atlantic Records at the time and five previously unfinished tracks featuring the classic Hall of Fame line up with brand new vocals and finishing touches from his current band.