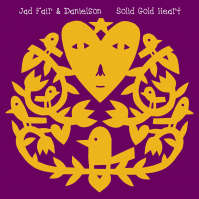 The words and primary voice are those of Jad Fair, that enduringly idiosyncratic artist revered in discerning pockets of the global indie rock underground for decades. Danielson's Daniel Smith has long admired Fair, drawing inspiration from Half Japanese (the band Fair formed with his brother in the '70s) on through to his prolific career today. Their discussions of collaborating finally came to fruition when Joyful Noise Recordings designated Fair its Artist In Residence for 2014 and Danielson was tapped as one of 4 artists (including R. Stevie Moore; Teenage Fanclub's Norman Blake; and Strobe Talbot) to record separate respective albums with him for a boxed-set limited release. Flattered and honored is how Smith sums up his feelings about the project -- and grateful to get a game-plan for what always seemed a complementary pairing. Sounds Familyre will be doing their own non-limited release of Solid Gold Heart in June, on CD, digital and gold vinyl. The 11 tracks of sweet collaboration collected under said title sound like what you might expect, given the respective artists: gleaming tunes of sincere sing-speak, resplendent with sparkling back-up vocals and warmly melodic, inventive instrumentation; a sunshine-bright outlook of positive encouragement to keep rockin' on the side of gooood -- because, after all, We deserve chocolate cake/ We deserve apple pie/ Enjoy your life ... The collaborative process commenced with Fair sending Smith his unique vocal demos of recited lyrics with articulated mouthsound musical qualities (some bits remain in the final mixes). Smith then wrote music for each chosen track, eventually getting Fair and drummer Gilles Rieder into his Clarksboro, NJ studio to record their parts during a few hours break from touring. Aside from Smith's own guitar-playing and singing throughout the album, there were contributions made by his brothers David and Andrew on percussion, and sisters Rachel and Megan along with wife Elin on vocals. Spicing things up at Fair's behest were members of Texas art-polka band Brave Combo: Carl Finch on accordion and keys; Jeffrey Barnes on sax and woodwinds; and Danny O Brien on trumpet. Bringing things full-circle was Kramer (Shockabilly, Bongwater, B.A.L.L. et al.) on bass, who also co-mixed and mastered the album. The result is a beguiling blend that builds off each participant's strengths, truly a fresh sum that is greater than its parts. The goal was to make 3-minute pop songs, as accessible and fun and immediate as possible, notes Smith. And that s what you ll hear, each track an uplifting, mutually enhanced concoction. Anyone who ever had a Solid Gold Heart -- wouldn t they want to turn around and share it? Of course they would. Jad Fair and Danielson are happy to offer up theirs.