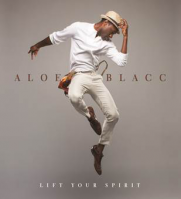 Soul singer and songwriter Aloe Blacc â€” who co-wrote and provided vocals for Aviciiâ€™s International hit single â€˜Wake Me Upâ€™ â€” will release his US Top 5 hit â€˜The Manâ€™ on March 30th. The track will feature on his upcoming album LIFT YOUR SPIRIT, which will be Blaccâ€™s first major-label debut via XIX Recordings/Interscope Records out April 7th.

â€˜The Manâ€™ is an uplifting, feel-good track, which samples Elton Johnâ€™s classic â€˜Your Songâ€™. LIFT YOUR SPIRIT follows up Blaccâ€™s collaboration as vocalist and co-writer on well-known DJ/producer Aviciiâ€™s track â€˜Wake Me Upâ€™, a song that hit the Top 5 on the Billboard Hot 100 and #1 on its Hot Dance Club Songs and Dance/Electronic Songs charts, as well as in 102 countries around the world, including the U.K., where it was the third-biggest selling single of the year.

Born in Southern California to Panamanian parents, Blacc released his first hip-hop mixtape in 1996 and was associated with the indie hip-hop scene for many years thanks to his rap duo Emanon (alongside DJ Exile) and touring with the collective Lootpack before going solo. In 2006, he signed to Stones Throw Records and released his genre-bending debut solo album Shine Through, followed by 2010's Good Things, producing the world-wide hit song â€˜I Need A Dollarâ€™. Good Things has sold more than 2 million units globally and has been certified gold in France, Germany, and the U.K. In 2012, Blacc was nominated for two BRIT Awards.