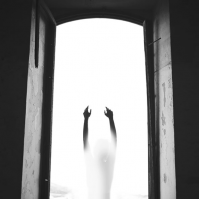 Ghosts Of Then & Now

His album arrives on the back of eager expectation. If anyone seemed set to make one of the standout albums of the era, it was Illum Sphere. The good news is that heâ€™s delivered in spades. "Ghosts Of Then And Now" has been deliberately and uncompromisingly conceived as a full length record, an album in the traditional sense, full of music that couldnâ€™t be more modern, whilst nodding to Hunn's various influences.

Opener "Liquesce" â€“ which features the drumming of Shigeto â€“ is aptly titled, conjuring as it does a sense of blissful dissolution. It also contains a haunting refrain thatâ€™s deceptively familiar, the sort of melody line youâ€™ll hear for years. The song ends abruptly (and cleverly) in a deep intake of breath, as if preparing itself for the album ahead.

"At Night" shows not only how adept with vocals Illum Sphere is â€“ layering Mai Nestor of Facitâ€™s beautiful voice into his music in a startlingly effective fashion â€“ but also just how far he pushes the template of his form. Elements of all the go-to genresâ€™ glitch, bass and drum experimentation are present here, but Hunn has mastered them completely, using them only for genuine emotive effect. "The Road" is the first of three fruitful collaborations with Shadowbox, AKA Bonnie Baxter. Driving drums with an industrial edge merge with anxious synths and looping, lilting melodies, the distinctive, rich vocal both seductive and foreboding.

"Itâ€™ll Be Over Soon" builds from an exploratory, ominous groove to a frenetic, restless release, in a study of mood that approaches the existential. "Lights Out In Shinjuku"'s deep bass and elemental, sci-fi synths steer the album towards its transcendental ending in "Embryonic". This the final part of the three Shadowbox collaborations, see her return to glorious effect. A simple, shuffle-swing drum and haunting melody give way to abruptly to ocean-deep bass and vast, emotive melody.

"Ghosts Of Then And Now" is further proof that electronic music is taking giant leaps forward. This is a record so rich in ideas, themes, textures and writing that it will draw the listener in time and time again. As such, it will take its place alongside the best works in the form.