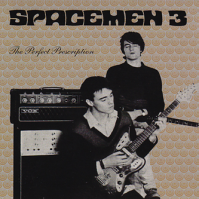 Having already reissued Spacemen 3's debut album Sound Of Confusion a couple of months back, Fire Records now present the band's second long-player (released in 1987), which surely has to contend as one of the ultimate drug records, echoing the ups and downs of japing around with controlled substances, producing career highlights such as 'Walking With Jesus', 'Ecstasy Symphony' and 'Take Me To The Other Side'. A bold, mood-swinging album that relishes the melancholy come-down tracks as much as the soaring '60s psych euphoria, The Perfect Prescription is a bonafide space-rock classic. On this edition the bonus tracks come in the shape of B-sides 'Soul 1' and 'That's Just Fine'.