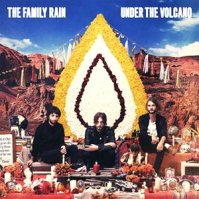 The Family Rain are Will Walter (vocals & bass), Ollie Walter (guitar & backing vocals) and Tim Walter (drums & backing vocals).
When they’re not on the road, twins Will and Tim and elder brother Ollie still share the same small room in Bath that they grew up in. Maybe those years of close proximity help to explain why they’re such a telepathically tight live band and how they honed such a prodigious talent for writing unforgettable rock’n’roll tunes.
“We’ve literally lived in the same house our whole lives,” explains Ollie. “We’ve been writing together at home since we were 15, so eight years. It usually starts with a guitar riff and off we go.”
The brothers dropped school at 15 in favour of music college, but soon found that what they wanted to know couldn’t be taught. “We only went to music college for about a year before we realised it was absolute bullshit,” laughs Will. “Our music teacher said that the Beatles and Elvis were shit, so we literally never went back. We’ve been working on our plans to escape ever since.”
The band found their escape route in 2012 when the world first got a first taste of the incendiary, primal blues rock that the brothers had been cooking up. Their swaggering, cocksure home demo 'Trust Me… I'm A Genius' alerted record label scouts and industry tastemakers that they had the real thing on their hands.
After signing with Vertigo they flew to Berlin at the beginning of 2013 to spend four weeks recording their debut album 'Under The Volcano' at Berlin's famed Hansa Studios. The sessions were helmed by Jim Abbiss, whose previous credits include work with Kasabian as well as producing Arctic Monkeys’ Mercury Music Prize winning debut album, ‘Whatever People Say I Am, That's What I'm Not’.
Although the band were excited to work in the notorious studios where David Bowie and Iggy Pop recorded ‘“Heroes”’ and ‘Lust For Life’ respectively, they weren’t fixated on history. “We’re not looking towards the past,” says Tim. “It’s great that all those guys recorded here, but we’re obsessed with modern records as much as we are old-school ones.”
'Under The Volcano' is the sum of all those influences and more: full of hook-filled, strutting rock songs, shot through with a trace of hip-hop swagger.
“We used to have other people in the band and be quite strict about the type of music we’d make, but we had an epiphany when it became just the three of us,” Will explains. “I remember us being on holiday in the sun and listening to ‘Can’t You Hear Me Knocking’ by The Rolling Stones. We thought: ‘This is the point of music. From then on it’s just been about writing music that you can fucking get into and groove to.”
They arrived in Berlin with over 40 songs in demo form to chose from, before witling that list down. “We had the romantic idea of wanting to go somewhere and make a record,” explains Will, “so that we could leave Berlin and have it is almost as a souvenir. We had a few loose ends of songs that we wanted to muck around with and we just went fucking ballistic with them. We finished off those songs in the month in Berlin and two or three ended up on the album.”
After they wrapped up recording in Berlin, the band wasted no time in getting back to where they feel most at home: the road. “If we had it our way we would be playing shows 365 days of the year,” says Ollie. “And if we weren’t doing that then we’d be in the studio. We find it so natural because we’ve been playing music together since we were 14.”
The band have spent the best part of the last twelve months relentlessly touring the UK and Europe, winning new converts wherever they play. Highlights have included tearing up Reading and Leeds Festival this summer, playing and partying at Ibiza Rocks with Biffy Clyro and storming the iTunes Festival alongside Thirty Seconds To Mars. They’ve also toured the country with both Miles Kane and Jake Bugg. Their own headline tour in November includes a date at Heaven in London.
Having amassed an army of fans all over the continent, the release of 'Under The Volcano' can’t come soon enough. It’s a record that takes no prisoners and matches up to the band’s already stellar live reputation. It manages to deliver on the band’s own sky-high expectations of themselves. “We’ve always dreamed big,” says Will. “We want to sell a million fucking records and headline every festival around the world. If you’re not thinking huge then what’s the fucking point?”
From a tiny bedroom in Bath to Berlin’s legendary Hansa studios and stages all over the world, The Family Rain have taken the last year comfortably in their stride. With the release of 'Under The Volcano' in February 2014, watch them explode.