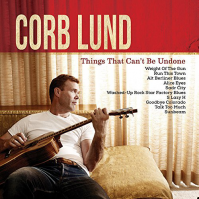 Lund will unveil some of the new material this weekend at his inaugural Down From The Mountain Fest taking place this Saturday, August 22 in Eureka, MT. He will then play several shows in Canada before heading to Nashville for the Americana Music Festival. An extensive tour is planned for October.

Recorded with his long time band The Hurtin' Albertans (Grant Siemens on electric guitar and lap steel, Kurt Ciesla on bass and Brady Valgardson on drums), Things That Can't Be Undone is a self- assured and mature set of songs that pairs Lund's characteristically sharp songcraft with a bevy of new sounds, thrusting his mix of earnest Americana, rollicking honky tonk and rousing alt-country to new heights. "I would like to think it's a healthy balance of pushing our stylistic boundaries and pushing our audience's ears, but keeping it familiar enough so that they're not totally alienated," explains Lund. "I think I've trained them by now to expect different things."

Whereas in the past, Lund and band brought fully formed songs to the producer and knocked out an album in a few days, they took a different approach this time. Over a two-week period this past April they holed up with Cobb in his studio and collaborated with him on each of the arrangements. Together they constructed the songs, broke them down, and often rebuilt them. "Dave has a very organic, and somewhat retro, way of working," reveals Lund. "He's into old school sounds, and less processing. It's a real natural sort of sound, which I'm also very into. He's very spontaneous and he wasn't afraid to tear apart my arrangements and start over. It was good for us."

The end result is a lively and loose record influenced heavily by '60s and '70s rock and country and steeped in the kind of narratives Lund is beloved for. The cautionary tale "Talk Too Much" swaggers like a Stones song as Siemens exhibits some searing guitar chops. On "Washed-Up Rock Star Factory Blues," written with Evan Felker of the Turnpike Troubadours, Lund offers an uproarious response to Johnny Paycheck's classic "Take This Job and Shove It": "Here's your backstage pass to the warehouse boiler room/That's what he said as he handed me my broom/Don't be sittin' down now son, it ain't your break time yet/I guess you're used to them seventy-five minute sets." In the powerful "Sadr City" an Eastern influenced psychedelic guitar riff sets that scene for a tragic tale about the Siege of Sadr City, the first big flare-up of sectarian violence in Iraq after Mission Accomplished. The track continues Lund's tradition of military songs that he began in with his 2007 album Horse Soldier! Horse Soldier!

Loss is a prevalent theme on the record and takes several different forms throughout. On the poignant album closer "Sunbeam" Lund, who recently suffered the losses of his father and grandmother, laments the death of his young niece and sings, "I wish you could have stayed a little longer/And shone more of your sunlight in our lives." Elsewhere he grapples with the impermanence of places he loves as on the bristling "Alt Berlin Blues," which plays out like a modern day "Big Yellow Taxi," as he sings about a favorite German watering hole getting leveled to make way for condos: "A century of thirst outlasting two or three world wars/One hundred year old beer halls that do not exist no more." On the potent cowboy folk song, "S Lazy H," Lund, a 6th generation rancher, details how life on the ranch has changed due to expansion and greed: "Sometimes right isn't equal, sometimes equal's not fair/There will soon be rows of houses on that ridge over there/Many lifetimes of labor will be all but erased/So shed a tear and look skyward, God help the S Lazy H."

Lund's previous studio album, 2012's Cabin Fever, hit #1 in Canada its first week, was certified gold, made the Polaris Music Prize longlist and led to him making big strides in the U.S. In addition to helping him secure a foothold in America, avowed fan Miranda Lambert invited Lund to open several stadium shows for her and Dierks Bentley and record made an impression with the media; raves came from NPR, Uncut (9 out of 10) the New York Times and the Washington Post, which exclaimed: "Lund is a revelation, laconic and scary smart, with a devil's eye for details." With Things That Can't Be Undone, Lund is poised for an even bigger breakthrough.