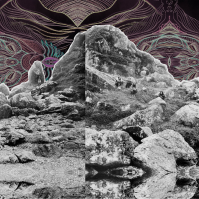 The Tennessee outfit, who had garnered much praise for their first two albums, retreated to a cabin on the outskirts of a town in their home state called Pigeon Forge - home of Dolly Parton's Appalachian-themed Dollywood - to work on their third. They emerged five days later with 'Dying Surfer Meets His Maker', their first for New West Records, a label known for its Americana and what pigeon-holers call alt-country releases.
It continues down the psychedelic path of its predecessor 'Lightning at the Door' ('El Centro' is an eight-and-a-half-minute White Manna-style freakout), while keeping some of the steamy, swampy blues rock of their debut 'Our Mother Electricity' ('Dirt Preachers' is a stomper), but it is what they have added that makes this album so good a cinematic outlook which serves as a celebration of the large landscape of the US as songs flow into one another like the changing view from a car window and a vulnerability, world-weariness and melancholy which gives the album real depth and substance.
LP - White vinyl LP is packaged in a gatefold sleeve with digital download card.