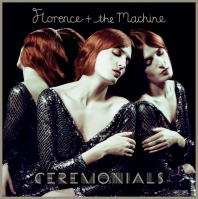 Florence Welch launches her second album with a conjunction: â€œAnd I had a dreamâ€¦â€ Itâ€™s as if she knows she already has our attention and is confidently picking up the threads of an urgent conversation. Or maybe (with church bells ringing in the background) itâ€™s a confession.
This is not an airy-fairy pop dream of world peace but an actual dream, describing an encounter with a dead loved one. Welch focuses relentlessly in on this small, strange scene, tackling it with surprising sounds and poetic language, until she has shaken something bigger out of it, something potentially transformative.
Thunderous drums kick in at 35 seconds, building up until it sounds like a battalion of percussionists swarming over icy piano notes. By the breathless end, an orchestra is sawing away while Welchâ€™s keening vocals rise above a chanting choir.

You might think she has shot her bolt before the album has even begun but actually she has just carved out her terrain. Ceremonials is a giant, fluid, emotionally resonant album, performed as if Welchâ€™s very sanity is at stake.
Ceremonials takes the musical template of her three-million selling debut Lungs and fills it to bursting point. It sounds as if producer Paul Epworth is trying to squeeze everything out of the singer-songwriter and onto the tracks. Contrary to the name she has given her band, the Machine feel organic and human, providing an epic, full-blooded soundtrack to Welchâ€™s voodoo, in which rhythm, melody and chanting are employed to drive out neuroses and insecurities, characterised as ghosts and devils. As she sings on Shake it Out: â€œItâ€™s hard to dance with a devil on your backâ€.
If the album lacks anything, it is restraint. It only once pauses for breath, on the light and poppy Breaking Down Again, on which she sings within herself, soft and deep, allowing the mood to be carried by the lovely chordal movement beneath. It is not that Welch doesnâ€™t understand dynamics â€“ there is light and shade here, songs rise and fall, but weâ€™re never far from a massive chorus and overwhelming outro, when the singer multi-tracks herself like a premenstrual Enya waging war on a tribe of Burundi drummers.
But the upshot is that she really does sweep the listener away, spinning wild webs of sound and carrying us off to her own aural dreamland.