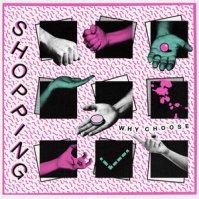 Limited first pressing of the LP will be on clear vinyl, with a 9 panel pull out poster.

Formed in East London in 2012, Shopping forge an itchy, angular explosion of propulsive bass lines, primitive drums and guitar lines sharp as broken glass. Having done time in a plethora of UK DIY bands including Trash Kit and Wet Dog, they draw from a well of late '70s / early-'80s post-punk with a voraciousness seldom seen these days, bringing to mind the jagged aggression of Gang of Four, the pure, raw yelp of The Slits and the dance-inducing thrust of Delta 5, The Au Pairs and ESG.

The band released their debut album 'Consumer Complaints' in November 2103 on their own Milk Records, and personally hawked around UK indie stores (where it quickly sold out of its 1,000 pressing). The LP drew a flurry of press for their spot-on divining of post-punk’s driving force, seeing them dubbed a “band you need to hear” by NME and “Artist To Watch” by SPIN. Pitchfork wrote that "the fragmented shout-it-out hooks, pin-prick guitar lines and ramshackle rhythms... sound like they were captured live off the floor in the BBC's Maida Vale studios sometime in 1981," noting that “they never sound particularly dated or like a carbon-copy, a testament to the group's song writing abilities.” Rather, Shopping embody the spirit of experimentation, social upheaval, (without becoming didactic) clashing gender politics and ethical change that defined their 70’s counterparts and still ring true today.