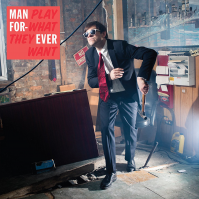 Play What They Want

The music of drummer John Colpitts as Man Forever is explorative, innovative and fearless. A musician and composer equally versed in the disparate musical languages of DIY rock, improvisation, and contemporary classical, Colpitts (aka Kid Millions) has made an album that defies genre classification. Propulsive, elaborate drum arrangements (created with Tigue Percussion) remain essential to Man Forever - on the songs of Play What They Want, they are augmented by voice and melody with contributions from Laurie Anderson, Yo La Tengo, and Mary Lattimore to name a few. Play What They Want represents the culmination of 25 years of musical engagement by one of New York’s most acclaimed percussionists. The collaborative process, essential to Man Forever, requires the relinquishing of one’s ego for a greater purpose. In Play What They Want Colpitts leverages a vast and talented stable of diverse collaborators to create a work that transcends the sum of its parts. You Were Never Here kicks off the album with a gorgeous vocal performance by all members of Yo La Tengo and, like the transition from the black and white to technicolour, the piece becomes a driving, wild marriage of Max Roach’s Garvey’s Ghost, McCoy Tyner, Alice Coltrane and Steve Reich. World-class harpists Brandee Younger and Mary Lattimore join bassist Brandon Lopez, pianist Sam Yulsman and the Quince Contemporary Vocal Ensemble to create an experimental jazz and classical “dream team.” Ten Thousand Things resonates with Tigue’s tense, virtuosic compound meters, a Moondog-esque vocal by Colpitts and singer Nick Hallett, and another intuitive performance by harpist Mary Lattimore. Finishing the side, Debt and Greed is a surprisingly wry pop tune that combines Colpitts’ Jaki Liebezeit-esque drum groove with CSN-style harmonies, guitar by Trans Am’s Phil Manley, and horn playing by Ben Lanz (Beiruit, The National, Sufjan Stevens). The second side leads with the evocative album centerpiece Twin Torches. Here Colpitts worked with the legendary multi-media artist and musician Laurie Anderson, who provided spoken vocals and violin on the nearly 10-minute tour de force. This composition also features arresting vocal atmospherics by Quince, which precede some of the most complex drumming Colpitts has ever recorded. The album closes with Catenary Smile, a prickly ballad featuring Nick Hallett’s cascading background vocals which buoy the lyrics: a contemplation of humanity’s problematic tendency to anthropomorphize inanimate things. While Colpitts’ previous albums have expanded on the possibilities and limitations of drums and percussion, this new album redefines the project in myriad ways. Building on a complex rhythmic foundation, Man Forever created an album that is innovative, imaginative and joyous. Play What They Want is a rare record of untamed ambition that hits all its marks.