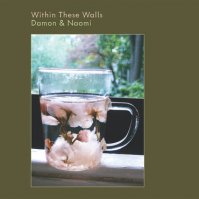 In 2005, Damon and Naomi released The Earth is Blue, an album that looked out to all the places they had visited and cultures they've experienced. Two years later, and two decades into their uniquely realized career, the duo cast their view inward with the release of Within These Walls. With emotional songs of highly personalized lyrics, Damon Krukowski and Naomi Yang explore the depths of the human condition, with its pain and loss and tragedy balled up with the quiet beauty of existence. and, beyond life itself, where to look for inspiration on such solemn topics? Everyone has their own sources, but Krukowski and Yang took it directly to the chairman of the board. "we bought lots of Frank Sinatra LPs, cleaning out the local stores. He released one sad album and one happy album a year, you can tell by whether he's smiling or frowning on the cover." Listening to the production style of those albums (especially the sad ones!), how the arrangements were able to load on instruments while keeping the vocals pure and clear, Provided a new approach for how Damon and Naomi would go about recording the new record, which has a greater amount of varied instrumentation than they ever used before. Saxophonist Bob Rainey arranged horn and also lush string accompaniment (including cello performed by Helena Espvall of espers), while the "silent third member" of Damon and Naomi, Michio Kurihara, contributes his skills as one of the world's greatest guitar players throughout. Damon and Naomi have fully realised their ideal of how to be a band.