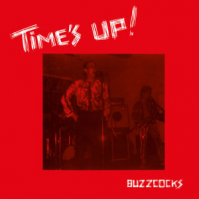 ‘It’s the Buzz, Cock’. Howard Devoto read this headline from a January 1976 Time Out review of ‘Rock Follies’, the 1970s TV musical drama following the ups and downs of the fictional female rock group, ‘Little Ladies’. Adapting and appropriating it as the name for his new band that he had just formed with Pete Shelley having realised what a Sex Pistol was before anyone else. Buzzcocks formed having witnessed firsthand the white-heat of the early Sex Pistols. Howard and Pete went about organising the now infamous 1976 Lesser Free Trade Hall gigs that brought punk to the provinces and galvanized the new Manchester music revolution. The plan was to simply play support to the Pistols and then see what happened next…Featuring the original line-up of Howard Devoto (vocals and songwriter), Pete Shelley (guitar and songwriter), Steve Diggle (bass guitar) and John Maher (drums), Time’s Up was recorded at Revolution Studios, Bramhall Lane Stockport on the 18th of October 1976. The session, recording Buzzcocks’ live set at the time, cost £45 and was engineered by Andy MacPherson.