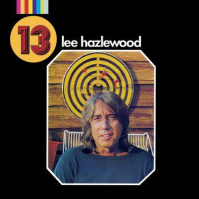 13 was never supposed to be a Lee Hazlewood album. It is perhaps the strangest record in one of the most varied discographies in music. The bombastic brass-heavy funk, deep blues and soul paired with Hazlewood’s subterranean baritone would be best enjoyed with a tall Chivas in an off-strip seedy Vegas lounge. It also features one of Hazlewood’s greatest lines ever “One week in San Francisco, existing on Nabisco, cookies and bad dreams, sad scenes and dodging paranoia.” By 1972 Lee Hazlewood had settled in his new homeland of Sweden. His days were spent carousing, making movies with Torbjörn Axelman and releasing albums. To keep up his prolific recorded output, Lee began to mine the recently defunct LHI Records archives for material. One such gem, was an unreleased album by Larry Marks. In what became the final days of LHI, staff producer Larry Marks’ sonic fingerprints were on nearly everything; songwriting, producing, arranging, and singing. His most profound contribution was steering the creative direction of the label towards soul and R&B, arranging the downright funky LHI singles by Barbara Randolph and Jon Christian. Larry’s concept was to take Hazlewood’s strongest compositions and arrange them in a soul vibe. An album was completed, but with no distribution in America and no funding, Lee had no vehicle to release Larry’s record. The tapes were taken to Sweden, Larry’s voice was wiped and Hazlewood’s was dubbed....13 was born.