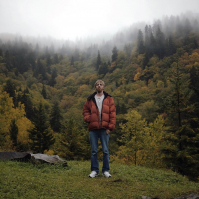 The music made by Luke Roberts is wide in scope and spare in structure. It is as universal as it is personal - if you have to label it, the right stamp to put on it might be 'redemptive blues'. The songs themselves are not looking for or extolling redemption, but the search for liberty that underlies them and the sense of freedom they express (often between the lines) leave the listener with a sense of optimism that can only be called redemptive. Roberts' songs, while deeply personal in origin, touch on universal life experiences and emotions. Both the music and the musician celebrate the quest for liberty What is it? Can it be imbibed? Embodied? 'Sunlit Cross' is unwaveringly honest and raw, as Roberts gets closer than ever to his true self a person who looks past the dark truths to see a real light. Roberts has long searched for freedom - even as a kid growing up in East Nashville, he began train-hopping, exploring who he was and where he should be in the world. Four years after the release of his second album 'The Iron Gates at Throop and Newport', Roberts has gone from living in a trailer in Montana to living on acreage in Tennessee, where he is learning how to farm. In the passing years, Roberts dealt with heartbreak and wanderlust, driving between New York and Nashville, living out of his car for weeks, traveling to Cambodia and Thailand and finally to Kenya, where he stayed with a family whose day-to- day challenges and simple needs impressed him. It was in Kenya where the songs on 'Sunlit Cross' originated. The record is a lullaby, Roberts says, one that pits darkness and disenchantment and the ugly side of life against levity, love, and childhood. 'Sunlit Cross' was recorded at Ronniejone$ound with Kyle Spence (who, in addition to recording tracks for Kurt Vile's 'B'lieve I'm Goin Down', also drums with Vile and Harvey Milk). Spence worked closely with Roberts to make the record sonically richer than ever before. The Sunlit Cross crew (including Stephen Tanner of Harvey Milk and Music Blues) would sit on the deck and eat White Castle burgers and drink beers and look out on the Georgia pines with birds and crickets echoing all around. LP version pressed on virgin vinyl with free download coupon. CD version in 4 panel mini-LP style gatefold package.