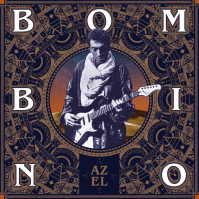 Partisan Records release \'Azel\' by Bombino. Oumara \'Bombino\' Moctar is a prolific guitar player pioneering a new style of Tuareg music which he affectionately calls \'Tuareggae\' - a sunny blend of Tuareg blues / rock with reggae one-drop and bounce. It is a blend of traditional Tuareg blues with Western vocal harmonies (much due to Dave Longstreth\'s influence) which give the songs new depth and colour. The album was recorded in Woodstock, NY, produced by Dave Longstreth (Dirty Projectors) and mixed by David Wrench (FKA Twigs). The album title \'Azel\' has three meanings The name of a small desert town a few kilometers from where Bombino grew up in Agadez, Niger the roots or stems of a tree slang in Tamasheq that would loosely be the equivalent of \"That\'s my jam!\" LP includes digital download code.