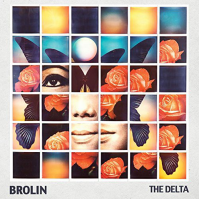 "The Delta" is the highly anticipated debut album from elusive producer and songwriter Brolin. The UK based artist has always taken a minimalist approach, withholding those details beyond the music, choosing to express his identity and aesthetic simply through deeply personal songwriting and a voice that tells countless stories of its own. Since his debut "Cundo" EP on Double Denim, Brolin has continued to live up to the hype. As well as producing his own material with the likes of Luke Abbott and Peaking Lights, he released his glitteringly beat-ridden mixtape "Flags", which featured a stream of collaborations from Raffertie, Dam Mantle, FTSE, and Hannes Rasmus, followed by the house-flecked soul of single "Swim Deep," a sleeper hit that's amassed over 1.5 million streams on Spotify. His debut full-length album brims with shimmering beats and heartfelt melodies, carrying reflections, observations and a yearning nostalgia. Although the album was written in the comfort of Brolin's living room, "The Delta" is all about escapism of the mind and the wonders of travel. From the stark realism of northern England to the vibrant heat of Barcelona, experiences and perceptions weave through Brolin's song writing as he touches upon anxiety, hope, optimism, and the occasional desire to disappear somewhere else. Having collaborated with Ninja Tune's Raffertie on production, the album features a cohesive array of electronic-led gems, borrowing notes from dance, pop and soul. From the hushed and gently touching "NYC", to the mesmeric, house infused-repetition of "Nightdriving", each track is beautifully positioned around a hypnotic hook and Brolin's silky vocals. Lyrically compelling with nuanced, layered production, "The Delta" is an album destined for repeat play and enjoyment. Run away to distant lands as Brolin removes the mask for his otherworldly debut.