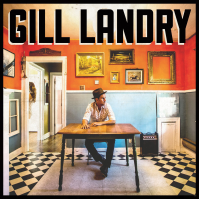 Gill's self titled third album is his first on the ATO label, but he is not new to the family. He's played guitar, banjo, pedal steal, and been a contributing songwriter in Old Crow Medicine Show since 2004. Although Gill's music is influenced by some of the same sources as Old Crow, from Dylan to old delta blues songsters, his music is very much his own. As one reviewer put it, "Landry's too sharp a storyteller, too tuned-in a craftsman, too real, to find himself on the wrong side of suspicion. Like Tom Waits, John Prine, Steve Earle... Landry is down-to-business believable. His songs carry their own persona, and though they may be creepy and otherworldly at times and nasty and grubby at others, they're familiar while remaining at arm's length."

Gill produced and recorded the album, "mostly from a ramshackle, shanty-ass apartment on the south side of Nashville," but was aided by a constellation of talents gathered on his nonstop travels. From Laura Marling, who duets on "Take This Body", an urgent plea that images the desperate love that courses through our impermanence, to trumpeter Nick Etwell of Mumford and Sons, who plays with tasteful power on a handful of songs. From Odessa Jorgensen, who lends harmonies and violin to a number of tunes, including the waltz-time love letter "Emily", to Robert Ellis who's eloquent and understated guitar work on "Fenario" and "Bad Love" is mellifluous.