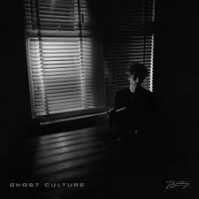 In recent times, Phantasy have provided the soundtrack for many adrenaline fuelled nights and hazy mornings with critically acclaimed albums from Daniel Avery ('Drone Logic') and Connan Mockasin ('Forever Dolphin Love' & 'Caramel'). Their latest discovery Ghost Culture emerges from the shadows to make the space between those two worlds his own. Since announcing his arrival one year ago with a debut single 'Mouth', the London based artist has built up a feverish following with a further pair of ear catching singles. Now Phantasy are proud to present his self titled debut album, a collection of ten tracks rich in emotion, musicality and sonic artistry.

A soundcloud stream of ‘How’ caught the ear of DJ and producer Erol Alkan, who promptly signed Ghost Culture to Phantasy off the back of that single track. The young artist was then invited to join Alkan in the label’s own Phantasy Sound studio, where they would both develop, build and mix the ten songs into this album. A creative journey, which lead Alkan to state “This first album is just the tip of the iceberg. There's so much amazing music coming out of him.”

His debut release, “Mouth” sold out within a matter of days, garnering praise from DJs and journalists and becoming a sought after commodity amongst record collectors. Dance music institution Mixmag were effusive in their praise, awarding the release their “Tune Of The Month Award” and describing its “atmospheric, moody and emotional" sound as sitting somewhere between “Deetron and Depeche Mode”. Second single “Guidecca” confirmed Ghost Culture’s songwriting talent and production expertise and garnered further rave reviews from the music press. Dubbed “delightfully woozy” by Pitchfork and described by Dummy magazine as a “jerky electro pop earworm that just gets better with every listen”, this sophomore release saw the artist carving out a niche between genres that was all his own. The brooding “Arms” followed, a queasy combination of early electro, dub techno and gloomy synth pop which seduced listeners with its outsider charm and paved the way for Ghost Culture’s debut LP. Alongside these impressive singles, the album boasts quaalude laced lullabies (“How”, “Glaciers”, “Lying”), machine funk shufflers (“Lucky”, “Answer”) and the gorgeous album closer “The Fog”, as he leads us on a textured journey from the intensity of the dancefloor to the moonlit intimacy of the bedroom.

"I have always had an itch that needed scratching. Music that needed rather than wanted to come out. I find myself within myself, words rhythm and melody that urges to take up the form of a recording and become something tangible." - Ghost Culture

Ghost Culture is a bedroom auteur in the lineage of Arthur Russell and Elliot Smith but with Whitey’s record collection and a Korg Mono/Poly as his muse. This coming months will see him head out of his bedroom and into the wider world as he takes a charming live audio visual experience on the road, sharing his talent and passion with us all.