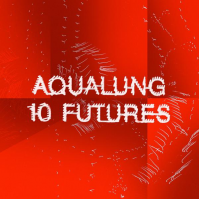 Matt Hales has made this year’s most surprising album. Less a departure from Aqualung’s past as a forward-looking fresh start, the aptly-titled ‘10 Futures’ is the sound of an artist gleefully abandoning boundaries, confounding expectations and, most importantly, having fun. ’10 Futures’ is precisely what it advertises on the tin – ten innovative songs that pursue an adventurous path with no precedent and will be released 19th January through BMG Chrysalis.

Five years ago, Hales swapped south London for the mountains of California, a move that transformed his life overnight and his career almost as quickly. He was, he announced, done with Aqualung after the release of his fifth album, 2010’s Magnetic North. His plan to produce and write for other artists went better than he could have dreamt. Jason Mraz, Alex Clare, Birdy, Paloma Faith and Rihanna collaborator Mikky Ekko were among those who knocked on his new studio door. He had a song, ‘Cold’, on the first Twilight soundtrack and commissions for adverts and TV series.

The prospect of making a new album, however, was left burrowing in Hales’s brain. Gradually, he realised the solution was staring him in the face. He should apply all he had learnt in the last few years to his own songs, collaborate rather than create in a bubble and be bold enough to break out of the box that Aqualung had become.

A glance at the album’s track list tells the tale. Seven of the ten songs feature guest vocalists; two of those that don’t were co-written. As diverse as the list of guests – which range from Lianne La Havas and Luke Sital-Singh to Glaswegian electro trio Prides and art-rock band Sweet Billy Pilgrim – are the styles of music they dip in and out of. From the R&B-meets-TV theme tune madness of first single ‘Tape 2 Tape’, sung by Joel Compass, and the distortion and strings-accompanied piano ballad ‘Seventeens’ to the frisky, Paul Simon-meets-Prince pop of ‘Shame On Me’, featuring Australian singer Josef Salvat, and the choral-influenced ambient beauty of ‘Everything’. Second single to be taken from the album will be ‘Eggshells’, featuring the exquisite voice of Lianne La Havas and has been co-produced by Howard Lawrence.

Every song tells a story, but rather than traditional tales of love, life or loss, they are stories of sound (often found sound), of methods of creation and of the process of collaboration.‘Heart’, which Hales wrote with Micky Ekko, came from a discussion about making your own instruments. The pair took a tom-tom out to the driveway and recorded it, as well as birds and a bit of traffic. That was the loop that started the song and, hence, makes it unique. Hales quotes “lots of sounds were made from other sounds. If you’re trying to shed the singer/songwriter skin, the last thing you want is to be playing piano all the time”. 10 Futures’ really is the sound of Aqualung revived, reinvigorated and fearlessly reinvented.