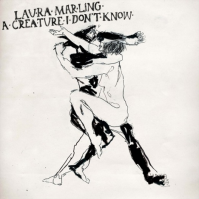 A Creature I Don't Know

Following a handful of live previews and a teaser video/album title announcement, Laura Marling has officially unveiled the tracklist, release date, and cover art for her third LP, A Creature I Donâ€™t Know, due out on September 13. Behold Creatureâ€™s excellent album cover above and song titles â€” which include recent live favorites â€œRest In the Bedâ€ and â€œWho Am I?â€ â€” below.
As for arrangements on the album, Marling told Spin that her 5-piece live band â€œdictated the soundâ€ in some ways, combining traditional folk instruments (acoustic guitar, banjo, double bass) with keyboards, harmonium, and horns. Notably, Marling employed her new octave-shifting effects pedal for the set: â€œI bought a POG pedal and borrowed an electric guitar the week before we hit the studio,â€ she said. â€œWe very nearly put the whole album through the POG.â€ Here are the 10 Ethan Johns-produced tracks that made the cut alongside a live take on Marlingâ€™s ode to John Steinbeckâ€™s hometown of Salinas, California.