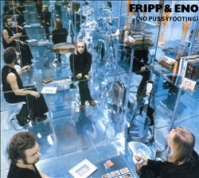 On September 8th 1972, Robert Fripp brought his guitar and pedal board to Brian Enoâ€™s home studio. Using Enoâ€™s twin tape recorder/loop method setup Fripp provided two takes â€“ one for the background guitar loop and one for the foreground solos with Eno selectively manipulating which signals were committed to the final tape. The 21 minutes piece of music that resulted, â€œThe Heavenly Music Corporationâ€ became one of the most significant and influential pieces of electronic music ever recorded. The other track on the album â€œSwastika Girlsâ€ was not recorded until over a year later in August 1973 at Command Studios in London. Pinned to the mixing desk was a piece of paper with the words â€œNo Pussyfootingâ€ â€“ Frippâ€™s reminder to both musicians that they should not compromise what they felt to be right or be deterred by the hostility to the project shown by management and record label alike. â€œNo Pussyfooting was released in November 1973 and went on to sell over 100,000 copies. Its unique achievement at the time was to place an album of uncompromising and experimental electronic music into the hands, homes and ears of rock music fans around the world.

The album is now regarded as a seminal recording.