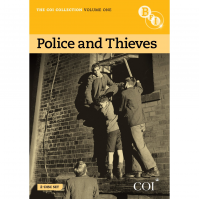 Established in 1946, the Central Office of Information (COI) was a successor to the wartime Ministry of Information and was responsible for producing thousands of films which celebrated Britain, its people and their achievements.

This first volume in the COI Collection explores the subjects of policing, crime, delinquency, and the justice system. A variety of styles and genres including story documentary, public information shorts and cinemagazines were employed to deliver crime prevention messages and bolster recruitment. Highlights include: Children on Trial (1946), an approved school drama set in a progressive and enlightened system; Youth Club (1954), which proposed a solution to keeping Britain s young people out of trouble; Help Yourself (1950), a nononsense crime prevention film; Man on the Beat (1956) and The British Policeman (1959), in which the local bobby comes armed with a friendly smile. Together, these films provide a wonderful record of British life in a seemingly more innocent age.